Oh. My. Goodnes.
I'm on a little remodeling break, this stuff isn't for sissies ...or for that matter fifty year old women with back issues. It's still fun, even through a haze of muscle relaxers and pain killers...better remodeling through chemistry.
I keep looking for treasures, for that wedding ring of Carolines that was lost more than forty years ago, anything! There was a newspaper from July 27,1961..it was stapled into the soffit in the kitchen - that was fun to look at...coffee was 69 cents a pound. It's obvious that every farm family that lived here over the last 110 years was on a shoestring budget, nothing was wasted, this old house was built sturdy but without any frills. The remodel from 1961 gutted the kitchen and changed the footprint from what I can tell. I was told that in the late sixties they blew in insulation...well...they did that on the north side of the house, but not a spec on the south wall...I guess insulation was considered a frill. Bare studs, not a spec of fuzzy stuff anywhere - unless you count spider webs...no wonder my heating bills cause choking and gasping every winter.
I've taken little snapshots of all of the different wallpaper samples...some are pretty...others...not so much.
But last night while we were peeling back layer after layer of linoleum, sub floor, plywood and tar paper...I found this flooring.
I like it!

I wish I knew the stories of the families that lived here before me...because I think I would like the lady that chose this flooring for the living area.
I can't help but wonder who she was and how she spent her days.
These are the things I think about while I'm crouched on the floor with my nail puller and pry bar.
Posted by Shelly at 8:55 AM

Sounds like the remodel is coming along wonderfully...pain killers make everything better.

When my aunt remodeled her kitchen she made a little shadow box with pieces of all the past wallpapers and newspapers she found. It's one of my favorite pieces of "art" in her house.

Oh my goodness! That was the flooring in our neighbor's huge old Victorian house. They had it in the huge dining room! What a rush it was to see this.

One old dairy farm, a farmer, his wife...and a dog.
The farmer farms.
The farmers wife writes the blog, she also likes to:
garden
cook
take road trips
read
find new music
buy too many magazines
make stuff out of junk
paint
arrange flowers
laugh
build stuff...
the farmers wife likes it when the farmer gives her power tools for gifts...that's not everybody's cup of tea but it works for her.
The dog is happiest when the people at her farm let her participate in projects...she usually has a bit of paint on her tail.

So Many Blogs, so little time 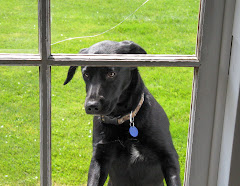